Joe MacMillan is a hard-driving former IBM sales executive who oozes charisma. When he shows up at Cardiff Electric, he essentially bulldozes his way into a senior position on the sales team. Once he has the job, he immediately orchestrates a plan to reverse-engineer his former employer's product and build something better, but his ultimate agenda is unknown. While Joe handles the sales for this new personal computer, he enlists the help of Gordon Clark and Cameron Howe to build this next-generation product.

In the process, their relationships are tested as he challenges Gordon to build a seemingly unbuildable machine and Cameron to write an operating system from scratch on her own, while she and Joe explore a volatile romance.

Joe has settled in Austin, where he lives with his girlfriend Sara, a divorcée and daughter of a successful Texas oil man. Joe hears that Cardiff has been acquired by a competitor and travels to Dallas to get his cut as a shareholder. He intends to use the money to relocate to the Silicon Valley where he can start a new venture.

At the Cardiff offices, Nathan Cardiff tells Joe that he is holding Joe financially accountable for the destruction of the first batch of Giant computers, which he has gone ahead and deducted from Joe's share. He then tears Joe's check (for over $600,000) into pieces, saying he hopes Joe will sue him so he can tell everyone about Joe's dirty dealings.

Joe returns to Austin with nothing. He proposes to Sara and it is not immediately clear as to whether the impulse is genuine or motivated out of emotional or financial desperation. Joe then accepts a job offer from Sara's father, Jacob Wheeler. Joe and Sarah relocate to Dallas. To Joe's dismay, he is tasked with a mindless job scanning years worth of company records in the basement. Sara encourages him to quit, insisting her father is humiliating Joe in order to punish her for the millions of dollars her first husband cost the company before he disappeared. Joe tells Sara he thinks Jacob is testing him and that he won't quit.

It is not long before Joe comes up with a profitable scheme to rent out the use of the company's computer hardware; Wheeler has banks of computing power that are only powered up from 9:00 to 5:00, meaning it all sits un-used for sixteen hours of the day. Joe makes several attempts to point out to his superiors that timesharing the hardware is a win-win scenario for Wheeler, but is repeatedly stonewalled. So Joe instead recruits Gordon Clark to help him make unauthorized adjustments in exchange for a lower rate for Donna Clark's company Mutiny.

Joe projects a confident, successful authority which usually charms those exposed to him in small doses. Over time, however, his circus showman bravado wears thin and other characters tend to call him out for his insincerity and lack of originality and self-confidence.

Joe is deeply affected by a childhood incident during which his mother took him up to the roof to look at the stars and let him fall. He spent two years recuperating in the hospital and was left with scars all over his torso.

Joe evinces sexual interest in Cameron Howe from the beginning; the two have a sexual encounter in an arcade in the first episode. Cameron breaks away when Joe offends her. After Joe recruits her to work on the BIOS for the Giant, she and Joe begin a casual sexual relationship that helps her focus when she is stressed. Over time, the two become close -- although Joe is willing to let Cameron suffer panic and anxiety when he makes it seem like she carelessly lost all her work on the BIOS, all in order to orchestrate drama for a magazine article. Cameron leaves Joe for good when he makes the decision to remove her pioneering program from the Giant. Joe moves to Austin and begins a relationship with Sara Wheeler, the thoughtful and somewhat submissive daughter of a successful Texas oil man. Despite getting married, Joe and Sara shortly end up divorcing as a result of her accusing that Joe still exhibits feelings towards Cameron.

Joe is estranged form his father, Joseph MacMillan, Sr., with whom he worked at IBM. It is revealed that Mr. MacMillan had his wife, Joe's mother, committed to an institution after she took her young son up on the roof as a child. Mr. MacMillan reveals to Cameron Howe that he taught Joe the correct form for swinging a baseball bat; throughout the first season, prior to stressful meetings, Joe is often depicted swinging a bat to psyche himself up, and he later breaks it over one knee when it seems likely the Giant will fail.

Joe is depicted as bisexual. He seduces the boyfriend of a potential investor in order to assert dominance in that business relationship, and it is also later revealed that he had a year-long affair with Simon, an artist he met in Europe who Joe tasks with designing the appearance of the Giant. Cameron is jealous of Simon and seems to worry that Simon and possibly Joe want to rekindle things. Simon confesses that he left Joe after professing his love for Joe; he knew Joe wouldn't stay with him, and he left in order to save himself the heartbreak. 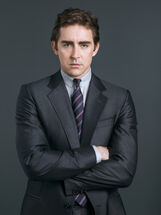 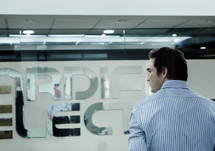 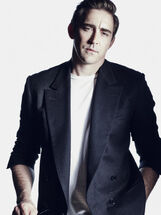 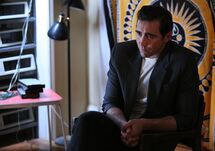 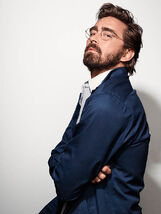 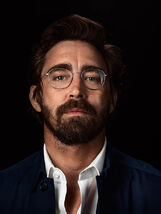 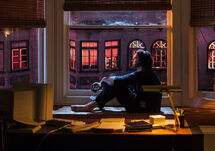 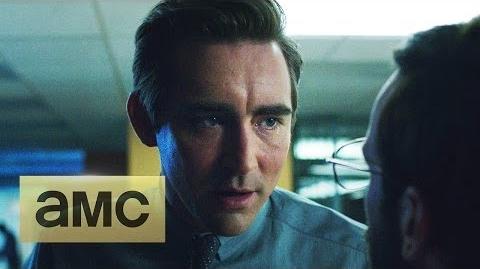 The Characters of "Halt and Catch Fire" - Joe MacMillan