As Cameron closes in on finishing the BIOS code for Cardiff's new PC, another crisis threatens to destroy all her hard work. Donna is brought in to help resolve the situation, but she is already struggling to keep her own job.

Joe and Bosworth argue over development cost rate of burn. Joe tries to show John their progress, achieved using unconventional technology in preparation for COMDEX, but Bosworth isn't impressed. Before the argument can escalate further, Bosworth is informed Nathan Cardiff is waiting for him on the phone.

"396 milliseconds!" one of the engineers exclaims. The prototype is already faster than the "Doherty Threshold" of 400 milliseconds - the latest standard measure of computer responsiveness. When Joe tells Cameron, he is surprised she doesn't react, so she gives him a self-knowing look and says "I knew it would be fast" and promises that the BIOS will be complete in two days.

Joe holds a team meeting to announce the milestone, explaining that a computer response time below 400 milliseconds is perceived as instantaneous. This means their PC will be faster and more addictive. He then reveals that a Wall Street Quarterly reporter is coming to Cardiff to write a story about the growing buzz around their machine.

To mark their achievement, he takes the IBM BIOS binder that he compiled with Gordon and lights it on fire. As everyone cheers, Bosworth watches Joe from beyond the flames. The two men make challenging eye contact—the internal power struggle between them is on

Tension begins to build in the Clark kitchen at breakfast - Donna reminding Gordon he has some family responsibility with the girls that day and Gordon wanting it all to be his wife's responsibility. Donna informs him her work is suffering, with late reports, and her boss can't keep covering for her. Gordon grumbles agreement and leaves the house to a surreal scene with the neighbor he fired confronting him in an odd way dressed in a bathrobe.

Joe, seeing the mess of trash in Cameron's office, enlist Debbie to help Cameron clean up before the reporter from the Wall Street Quarterly. Debbie's character begins to develop here - but she is clearly seen as foil to Cameron once again.

John arrives at the Cardiff ranch for breakfast, but as John tries to rush back to work, Cardiff asks Joe "what's your Rush" and "I thought Joe had everything under control". He questions John's handling of the investor 3 weeks before (in High Plains Hardware), saying she's an old friend who is not returning his calls, and when John tries to blame Joe's handling, Cardiff jumps all over him for not being more responsible. Cardiff tells John people are talking, "Who is really running the...", "make sure you establish who is Boss" and dismisses Joe most rudely. The point is then driven home by Cardiff ordering the execution of an old horse that can't walk any more. A rifle shot penetrates Joe's thoughts as he walks away dejected.

Cameron returns from her shower at Debbie's and finds her Hard disk is empty for the big meeting with the Wall Street Quarterly. Punk music loud plays down as Cameron falls apart on screen. The engineers rush in and a vacuum cleaner plugged into the computers power leads to a diagnosis of a power surge that fried the hard drive. Gordon ties to physically assault Cameron for keeping backup disks on her speakers and "...blasting music in here.", which they assume is the reason the disks are erased. They are separated just as the Wall Street reporter arrives to see the turmoil and smirk.

Gordon not only fails to pick up the girls on time, but arriving there late ends up asking asks Donna to come to Cardiff to try to recover the data, further jeopardizing Donnas own work. Despite Joe's best efforts to the contrary, the Wall street reporter refuses to leave until he can write the expose he had no intention of writing before the "LOST BIOS" incident. Joe assures him Cardiff engineers are the best, but later loses his mind in Gordon's office when Donna shows up to help. They fight over Donna leaving and finally Joe relents orders them to tell anyone who asks "She's a Cardiff employee. And don't use your real name."

We have no clue about Joe's bad behavior so far.

Donna approaches Cameron to understand the nature of the lost data and what Cameron may already have to help in its recovery. The lack of respect of Donna is palpable and the exchanges between the two are the most powerful drama In the show to date. Donna In particular emerges as a strong, intelligent, and powerful leader and maintains our respect throughout the episode. She rewires two hard drives to extract data to a third and succeeds, eliciting an engineer to state "she's smarter than you Gordon", to which he readily agrees. As the long recovery runs through the night, Donna re-bonds with Gordon, in a way they have not since they worked together on the failed Symphonic PC project.

Cameron breaks into the Clark Home to vandalize and meets fired next door neighbor Brian inside.

Donna confronts Joe after seeing degaussed backup disks were forged. Gets him to admit he fried the HD, stole the backups, provided fake , blank backups to stir interest with the Wall street reporter to write SOMETHING about Cardiff. Joe knew all along the writer didn't plan to write anything so he planned a setup.

Cameron reconciles with Donna in the parking lot.

On the way home that night, Joe is pulled over by Sheriff and is beaten with flimsy pretense. The next morning John bails him out, and it's clear he is on a first name basis with the arresting officers as they laugh and joke while Joe's paperwork is being processed. Joe leaves the police station in silence but in steaming fury over the incident and John's possible role in it.

Back at Texas Instruments, Donna gets put on probation by her boss for her late and this time, inaccurate report. Her boss has been unable to cover up the mistake this time and lets her know -- No more mistakes for Donna or she gets fired. 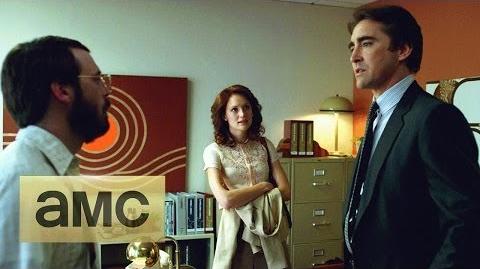 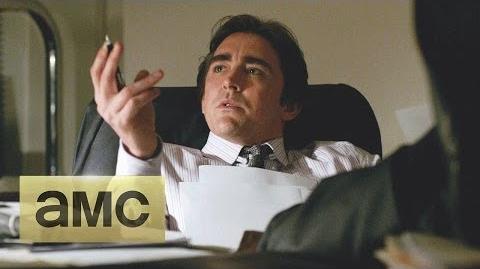 Retrieved from "https://haltandcatchfire.fandom.com/wiki/Close_to_the_Metal?oldid=7399"
Community content is available under CC-BY-SA unless otherwise noted.