Cameron Howe, born "Catherine", is a volatile prodigy who drops out of college and puts her future in jeopardy to join Joe MacMillan's rogue PC project. This 22 year old programmer is a shock to the system of conservative, old-guard Cardiff Electric, but she simultaneously represents what is next in the world of computing while delivering a slap in the face to the traditionally male-dominated 1980s tech industry.

The product of a tumultuous childhood, she finds connection and comfort in the mathematical certainty of coding but at the same time tends to create chaos everywhere she goes. She sleeps at the office, takes items from others' desks, blasts punk music, etc. Howe also sleeps with her boss and butts heads with engineer Gordon Clark.

Born Catherine Howe, she had many struggles making friends at school. She found herself being a shut in for most of her school life, until she found out about the Computer club at her school and began coding for the first time. At the age of ten, her father died in the Vietnam War, prompting her to take his name and become Cameron Howe.

The series begins with Joe MacMillian coming to speak in one of Cameron's college classes. She is rather unimpressed with him and his supposed position at IBM, question whether he 'matters' when he is later scouting her. He later revisits her and offers her a job at Cardiff Electric writing the BIOS code for their new computer. She agrees.

At Cardiff, Cameron deviates from the professional manor in which the other characters work. Ignoring orders, blasting music, and keeping a messy and unorthodox work space. Being a college dropout, Cameron no longer has a home to go to, so she begins living at the office in secret, sleeping in her office space at night.

Cameron is often quite rebellious in nature and loves to act in the moment. Despite regularly breaking down or harassing people for their mistakes, she often is hypocritical of similar actions, such as when Donna Clark breaks down while trying to bargain with Joe MacMillan in Season 2.

In the first season, Cameron has a rocky relationship with Joe MacMillan.

She meets Joe in the first episode; arriving late to a class, her professor has invited Joe to give a talk to the students of the class. Joe, on the otherhand, is scouting someone to assist him in creating a new PC. She immediately stands out to him, and he meets her later at a bar to discuss his project. They waste no time having sex in the back of the bar; however, after a derogatory comment she hits him and leaves.

By the end of the episode, Joe has forced Cardiff Electric into creating the computer he wants and he locates her at the bar once again to write the BIOS for the computer. She spends much of the first season working on this code and parts of the operating system for what later becomes the Cardiff Giant.

Over the season, she and Joe teeter between one night stands and real emotional feelings. Joe's emotional distance and her authentic but apathetic attitude often push them away from each other. He often lies about the actual reason he has the scars on his chest. During Landfall, however, Hurricane Alicia and being around Joanie and Haley helps Joe to break down some of the emotional trauma from his childhood and bring him back to his core self, and he tells Cameron the real story - this is a turning part in their relationship and they become much more romantically close. 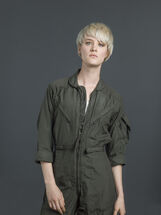 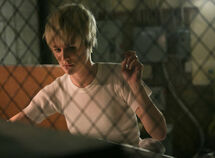 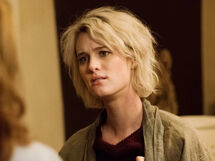 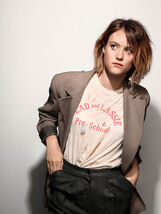 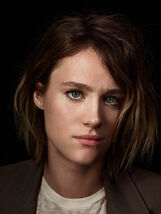 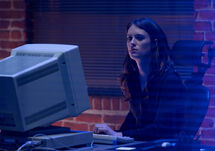 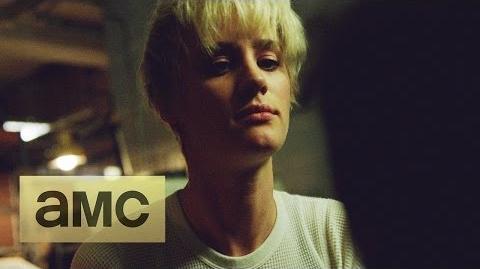 Retrieved from "https://haltandcatchfire.fandom.com/wiki/Cameron_Howe?oldid=7616"
Community content is available under CC-BY-SA unless otherwise noted.